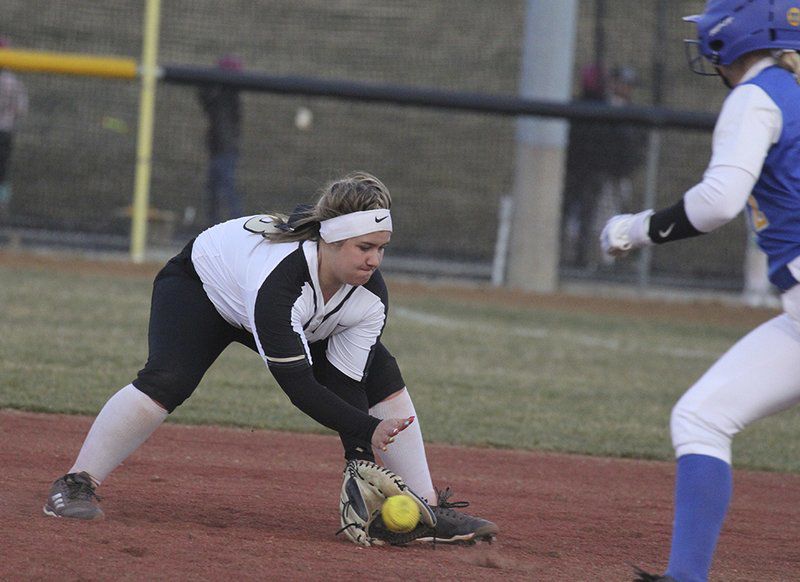 Lebanon — The Lebanon softball team is showing that they can win in different ways.

In their first two games of the season, the Tigers were able to out-slug Tri-West, posting 22 runs in a two-game sweep against the Bruins. Wednesday night, the Tigers managed just four runs on seven hits, but still found a way to win in a 4-3 victory over Carmel.

“We weren’t really happy with sticks tonight, especially after what we did last week,” Lebanon head coach Kerry Roussey said. “But we will take it, a wins a win. We just want to go 1-0 every day and we did what we needed to today.”

The Tigers were able to grab control of the game in the first inning, scoring two runs on just one hit.

Lebanon loaded the bases with one out on an error, a single and a hit batter. After a strike out, passed balls on back-to-back pitches allowed the Tigers to take a 2-0 lead.

“Offensively, we weren’t clicking, but we can still take care of opportunities when they come up,” Roussey said. “We loaded the bases there and got a couple of runs on passed balls, and when the other team makes a mistake, hopefully we are there to capitalize on it and we did tonight.”

The Tigers added on in the fifth, when Sarah Tribby hit an RBI-double, then scored three batters later on a Courtney Welborn single.

Carmel made things interesting in the sixth.

After an infield single with one out, the Greyhounds hit three-straight doubles to get within 4-3.

She struck out eight and moved to 3-0 on the year.

“I have seen her pitch going on two years now and this is by far one of her best performances,” Roussey said. “She showed that maturity. Last year, I probably would have come out and talked to her a little bit, but I know she had the confidence in herself to get out of that jam.”

Tribby and Payge Redman each had two hits for the Tigers.

Josie Hollingsworth went 1-for-3 with a walk.

The Tigers are 3-0 now heading into spring break.

“It has been a good start and I wish it wasn’t spring break right now to be honest,” Roussey said. “We are playing well and hopefully it continues when we get back. We have really been pushing it hard since December with open gyms and then the season, so hopefully after this break they come back refreshed.”

Lebanon’s next game will be April 9 against Western Boone, kicking off a stretch of five games in five days.

Roussey said it is tough to start the season, then have a long layoff, but the Tigers will deal with it.

“It is tough to manage,” Roussey said. “We have been working in the weight room since December, so hopefully we don’t really lose anything. We just want our kids to stay active on Spring Break and stay loose a little bit because we come back Monday then have Western Boone on Tuesday.”