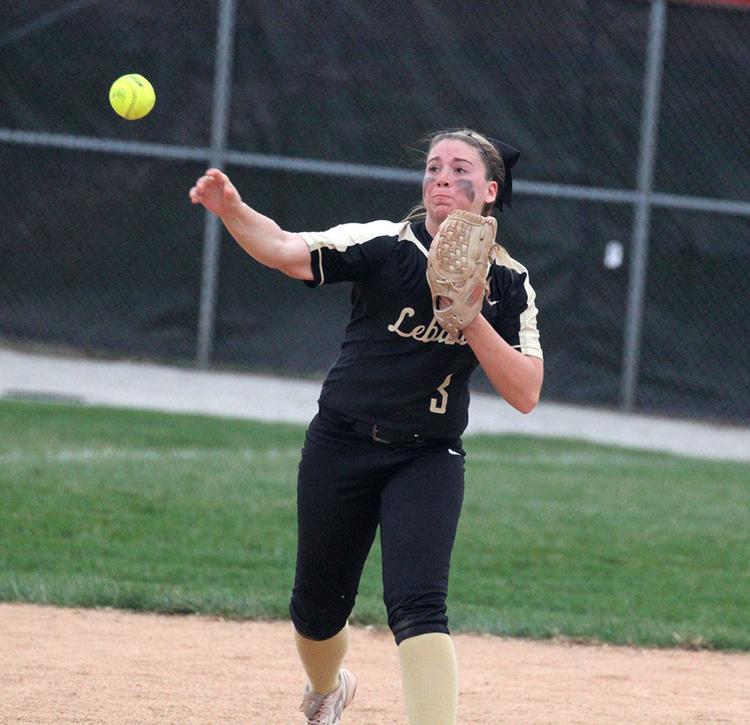 Dover — A sign of a good softball team is when things aren’t going your way, you can find a way to get it going.

That was the case for the Class 3A No. 5 Lebanon Tigers Thursday night at Western Boone. For five innings, the host Stars gave the Tigers everything they could handle, but in the final two innings the Tigers were able to score 11 runs and finished off a sweep of the Stars 12-4.

“This was a tough week for us,” Lebanon head coach Kerry Roussey said. “We stumbled out of the box a little bit, but we did some good things too. We did a good job of being aggressive early, we just didn’t get any breaks. Those came through later on.”

Lebanon had chances in its first four plate appearances, but Western Boone starting pitcher Hannah Redlin did a good job of limiting the Tigers offense.

The Tigers stranded five runners in the first four innings.

Those missed opportunities came back to hurt Lebanon in the bottom of the fourth.

Western Boone loaded the bases with no outs. After a pop out, Anna Jones drove in a run with a ground out.

Caitlin Smith then walked to load the bases, but the Stars stranded three.

“Our girls came out hot tonight and that was good to see,” Western Boone head coach Kendra Marshall said. “It was good to see them not be intimidated by Lebanon. Lebanon is a good team, and we came out ready to play tonight. Those first five innings were a lot of fun, and that is the type of softball we are capable of playing. We just need to do that all the way through.”

Lebanon tied the game in the top of the fifth on an RBI-double by Payten Redman.

The Tigers then were able to capitalize on Stars’ miscues in the sixth.

With one away, back-to-back errors put runners on second and third. Jenna Weaver drove in a run with a ground out, but after a walk, Lexi Puckett singled in two runs to make it 4-1.

“I am very proud of how we played the first five innings, they did a fantastic job,” Marshall said. “The wheels fell off a little bit after those errors. After that we talked about how we needed people to step up, and make the next play so we could go in and hit. If we would have done that, things would have been different and it would have been a ball game.”

The Tigers’ offense continued to shine in the seventh inning.

The first six batters reached on five hits and an error, and five scored to go up 12-1.

Lebanon finished the game with 13 hits, eight coming in the final three innings.

“I don’t think there was much of a difference in our approach,” Roussey said. “The wind died down, which helped. Early in the game, we were hitting the ball hard, it was just staying up in the wind in those first couple of innings.”

With two on and two outs, Redlin drove in a run with a single to keep the Stars alive.

Back-to-back errors allowed two runs to score, but a ground out ended the game 12-4.

“That’s not something we have seen a lot of this season, so I was proud of that as well,” Marshall said of the three-run seventh. “If you take away that sixth inning, we had a good game on our hands.”

Jenna Weaver was 3-for-4 with two RBIs and a run scored for the Tigers. Payten Redman, Abbi Wirey and Josie Hollingsworth each had two hits.

Abigail McPherson got the win, allowing one run on two hits in five innings. She struck out six.

Hannah Redlin took the loss, allowing nine hits in 6 2/3 innings and seven runs, but none were earned.

“Hannah did a great job tonight,” Marshall said. “She was getting ahead of hitters and really hitting her spots.”

Western Boone is off until Monday when they travel to Clinton Central.

Lebanon will play in the Lawrence Central Tournament, which also features Decatur Central and Westfield.

“We will face some good teams,” Roussey said. “We got a good feel this week with Kokomo and Western Boone. Lawrence Central is playing well and hit the ball well. Abigail will keep the score down for us, and we have to hit the ball hard, and see where the chips fall from there.”