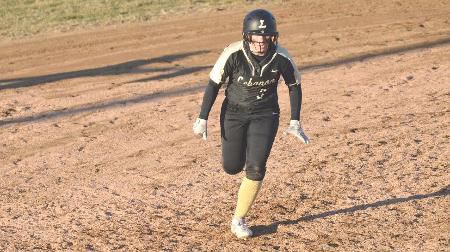 However, the sting of having their 2018 campaign ended prematurely might have had a little to do with their lopsided victory.

Behind 15 hits, the Tigers earned a little payback against the Bruins, taking their first win of the year and an early foothold in the Sagamore Conference race. Roussey noted last year’s postseason loss served as a little motivation but all of the league serves as rivals in his book.

“For the most part, we’re in a strong conference, we’ve got three teams in our conference ranked already and in 2A there’s [Western Boone] and Southmont,” Roussey said. “This is a tough conference to win in, so, we’ll take anything we can get. We’re all rivals.”

The Tigers tacked one on early but didn’t do most of their damage until the third and fourth innings when they pushed nine runs across. Jenna Weaver did the most damage for the Tigers (1-0) in those frames crushing a triple and a single for five of those nine runs.

For Tri-West, it would’ve been easy for them to pack it in and get ready for Saturday’s second game, but the Bruins (1-1) weren’t about to lay down and quit.

First-year coach Mike Miller implored his team to fight before every at bat and his group was happy to oblige, staving off being 10-run ruled in the final few innings.

“We showed a lot but we’ve also got a lot of growth coming,” Miller said. “[Lebanon] hit the ball well; they came out tonight, it’s a cold night and they hit the ball. We put some pitches where they could hit it and I told the kids, midway through, that we’re growing and we’re going to keep fighting.”

The Bruins first run of the game almost didn’t happen after shortstop Sydney Lewis hit a blooper to third base that was a surefire out.

Yet, the Tigers’ Lexi Puckett bobbled the catch, giving Lewis the chance to take first.

However, believing like the rest of the spectators the ball was going to be caught, Lewis headed back to the dugout as the ball hit the ground. Realizing she had a chance, she took off running as Puckett sailed the ball over the head of first basemen Courtney Welborn.

Lewis advanced to second on the throwing error and was later brought home by a Maddie Leisher triple two batters later.

The bats kept cooking for Tri-West as they started to figure out Tiger ace Abigail McPherson. They scored four more, but too much damage had been done for them to overcome.

McPherson went the distance for the Tigers with five strikeouts and six walks.

In spite of the loss, the Bruins weren’t hanging their heads after the game. Only two games into his tenure, Miller and his staff are still figuring out the best spots for most of his players. As the season goes on, he knows they’ll be back to form.

“It’s still early,” Miller said. “We’ve only been together for two weeks and we’re still trying to get our legs under who goes where. We’ll probably do that for two or three more weeks.”

For Lebanon, there’s no time to figure things out if they want to recapture the conference title and get back to postseason success.

After their first game with Sheridan ended prematurely, Roussey was glad to get his players out and put all of the things they’d been working on into a game.

“We’re going to hit the ball a lot better than we did last year,” Roussey said. “Up and down the lineup, we’re pretty strong. They’ve been hitting well in the cage and it was nice for them to finally get out here and actually do it.”

In addition to Weaver’s three hits, Lebanon also found three hits from Payton Redman and Welborn. For Tri-West, Leisher was the only Bruin with multiple hits, earning a single in the first inning in addition to her triple.

Tri-West and Lebanon play again today at 1 p.m. in Game 2 of their series.

Girls 8th Grade Basketball vs. Tri West A Team Only

Girls 7th Grade Basketball vs. Crawfordsville A Team Only