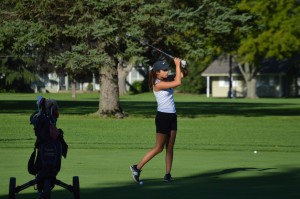 The Lady Tiger golf team saw their season come to an end Saturday at the Roncalli Regional, placing 10th in the field of 18 at Smock golf course. Sophomore Katherine Patterson led the team with 85, followed by senior Katlyn Coddington 89, and juniors Megan Sosbe, Josi Greene and Maci French shooting 90, 90, and 92 respectively. the tournament was won by Westfield at 297 with Westfield’s Kailyn Henderson firing a course record 64. Still the team had great season, winning the Ulen Invitational, the Sagamore Conference, and Sectional, and their regional score of 354 was the best ever for a Lebanon team at the regional. The team finished with a 17-2 record, also tying the school record for most wins.